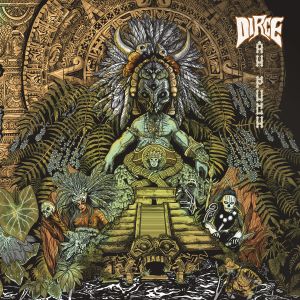 I don’t get to hear many bands from India, but I am glad I have come across this one. This is the debut release from Dirge, which is also available through Bandcamp, and they are taking doom and sludge and mixing it with death to create something which is immeasurably heavy. This music feels like a force of nature, pummelling and intense, the notes coming through like molten lead – silver and shiny when it first hits the air, but becoming grey and solid as it moves. The album is inspired by Aztec and Mayan mythology, and certainly doesn’t sound as if it has come from India as this is a full-on Western album designed to shatter ear drums and crush chests.

It is the intensity and unrelenting assault that really gets to the listener, as although they do change the speed and approach at times, the heaviness is always there. The final number, “Corpse of Cortez”, has the band move into thrash territory, before it totally changes direction and becomes a stoner instrumental. It surely can only be a matter of time until this gets picked up by a major – well worth investigation.