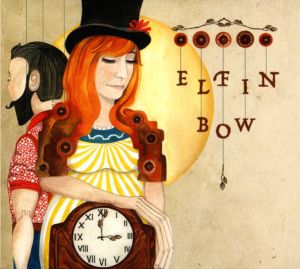 Towards the end of 2018 I was sent some singles to review by the wonderful Keith Jones from the amazing Fruits de Mers Records (who are rapidly becoming one of my very favourite labels). One of these was “Who Knows Where The Time Goes” by Elfin Bow and Gary Lloyd, and when I finally managed to get some words down on paper I said “I can only say that this is worth 10/10 as anything higher is a mathematical impossibility, but one almost wishes that it was possible to create a new construct of a higher value, as this is worth it. Simply incredible”. She also had a few songs on the live album ‘The 16th Dream Of Dr. Sardonicus Festival Live’, and by the time I heard that I knew I had to discover more about this wonderful performer.

So now I have on the player the debut album by Elfin Bow, a collection of 12 stories of modern folk/singer-songwriter material which is inspired by the likes of Sandy Denny, Kate Bush and even Janis Joplin (she doesn’t have the harshness of Janis, but “Hey Auld Friend” contains all her attitude). Elfin Bow was raised in a Baptist church, as was I strangely enough, and grew up learning Sunday School songs being inspired by the family folk group, The Beukemas, and singing three-part harmonies with her sisters. She was also adept musically, playing guitar, mandolin, violin and piano. As she became aware of the writings of Allan Kaprow, the music of Tori Amos and Bjork, she moved more into the performance arena and these days blurs the lines by being an accomplished artist as well as singer, running folk clubs and mentoring others to unleash their own creative potential.

Timeless, modern, this is an album which gives so much to the listener the very first time it is played, but also grows stronger and more important the more it is repeated. Elfin Bow has brought in musicians to assist her with the album, which allows her to provide more depth than if she were there on her own, and there is a real confidence that one doesn’t always get from a debut album. There is no amplification to hide behind, no aggression or over the top energy which allows her to get away with poor material or performance, it is all laid bare for everyone to hear. Her vocals are pure, clear and angelic, and the arrangements allow for each instrument to have their place in the firmament, but the use of space ensures they are both separate and combined at the same time.

I haven’t been this excited about a “new” performer in this style of music since I came across Mundy-Turner 15 or so years ago. The songs and stories are clear and clean, and they all take the listener on the journey. There are even two songs which are connected, telling the story from different perspectives, namely “Grimshaw and the Fingerclaw” and “Edith’s Song”. It is the first of these which is my favourite on the album, starting with a mandolin introduction which continues to be the main instrument, along with some shuffled drums, restrained bass and delicate harmonies. There are some times when her Liverpool accent comes through, and this is one of those, but it adds something special to the song as opposed to detracting from it.

This album was self-released in 2016, since when she has been performing both totally solo and with a band, so one can only hope there will be a new album in the near future, which I will be very much looking forward to. This is a gorgeous album which any fan of singer-songwriter/folk/acoustic music simply can’t do without.