Bow, Elfin - Live In Concert At The Epstein Theatre DVD 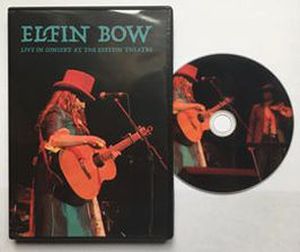 As well as the CD, it is also possible to purchase this DVD, which as the title suggests was recorded at the Epstein Theatre in Liverpool. It was the night of the album launch, and in March 2017 Elfin Bow brought with her a full band, many of whom had played on the album. I have been to a few album launches over the years, but I think this is the first one I have ever seen where the album is played in its entirety, in the same order. A couple of things stood out for me from this performance, aside from the very good sound and excellent multi-camera work which certainly doesn’t let one realise that in many ways this is a low-budget event with no label support. Firstly, Elfin Bow really doesn’t know just how good she is. Between the songs there are times when she obviously doesn’t believe she has got this far, to have recorded an album and now be onstage in front of a sell-out crowd who are there just to hear her songs. Secondly, she is as powerful and compelling in concert as she is in a studio.

In many ways this felt less like a gig, and more like a gathering of friends, as the whole concert feels as if it is way more intimate than one would normally expect. When she said that she finally had worked out how to swap guitars without knocking off her top hat, no longer needing the assistance of Muirreann McDermott Long (backing vocals), it felt like a conversation between friends. The feeling was that the band weren’t there in the role of musicians, but more as friends all working together to ensure that Elfin Bow’s songs are treated with the respect they deserve.

Needless to say, her vocals are spot on, and she takes us on a journey through her stories, swapping between different guitars and mandolin as necessary, and the arrangements ensure it is always her voice which is front and centre. Being a true Liverpudlian she invites everyone in the audience to the after-show party at the pub and makes sure she gives them details of where it! At times her performance is a little naïve, with that underlying feeling that possibly she doesn’t believe she should be there, and that adds to feeling of friendship coming through. This isn’t a rock god telling everyone just how great they are, but rather a singer hoping the people in the audience like her songs. Needless to say we all do, and the feeling of love really does come through the DVD.

So far she has released one full-length CD and one DVD, both of which contain the same material. But one was recorded in the studio, and the other is live in concert, and the only way of working out which is best is by having both. Elfin Bow is a wonderful talent, and I am so looking forward to seeing and hearing what she does next.