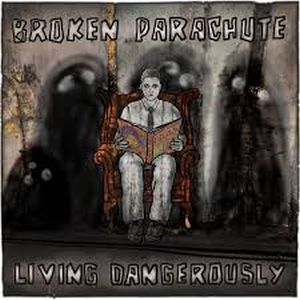 ‘Living Dangerously’ is the second album by Anglo-Canadian group Broken Parachute who have expanded from Ben Bell (keyboards, vocals, bass) and Marcus Taylor (guitars, bass, programming, percussion) with the addition of James Chapman on drums this time round. Both Ben and Marcus are also involved with fusion act Kashgar, and while Broken Parachute do also contain some influences from that area, mostly they are more rock-based, with elements of Porcupine Tree, Deep Purple and others. It is interesting to see how they describe their own music, as they view the album as “a sonic cocktail on the Rocks, blending equal parts Classic, Progressive, Jazz and Blues and cheekily spiking with a whatever they found lurking at the back of the cupboard. We hesitate to ask, but it was bright orange and it may have curdled.”

Yes, there is humour, but it is far darker on the album. The drum production is deliberately dry, so it stands apart from the rest of the musical layers, which are far more intricately woven. This is progressive rock which at one level is commercial and acceptable, the sort of music you could bring home to the family without it embarrassing you too much, but at others there is the feeling that at any minute it could go off and do something quite unpleasant. The artwork is strange, the lettering feels hand-drawn, which ties in with the music to create something which is almost lo-fi, indie prog maybe? It doesn’t feel at all like an album being released in 2019, but instead something from 1985-1993, and on cassette. The guitars happily solo over the top of the keyboards, but with far more anger than the likes of Howe or Gilmour.

It is a refreshing change from music which is over complex and complicated yet lift the lid and look through the layers and one will see there is actually a great deal going on here. There is also far more aggression than one may normally expect from progheads, but anyone who throws in Hammond Organ is always guaranteed a warm place in my collection. I can imagine this album being disparaged by some as not being prog enough, but to me this is a breath of fresh air blowing through the scene and is an album well worth investigating.