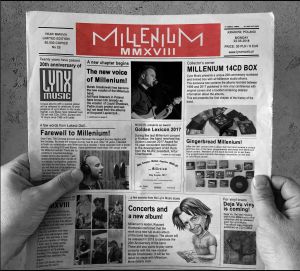 The cover of this 13th album contains a lot of information about the band and label, but possibly the most important is the item by the thumb of the left hand, namely the departure of singer Łukasz "Gall" Gałęziowsk who has been the voice of the band since their very first album in 1999. But in the middle under the banner, one can read the news that the band have found a new singer in Marek Smelkowski who I first came across when he was singing for the wonderful band Padre. Changing a singer is obviously always a significant change, but the band have found someone who fits perfectly into the groove and sings in perfect unaccented English.

Millenium have long been one of my very favourite Polish bands, whatever genre, and part of that has been due to the continued high calibre of their music, and that continues with the latest release which is somewhat unusual in that virtually all of the songs have already been released. This is being treated as an introduction to Marek, so apart from one new song (called “Unnamed”), the others (which are the 9 minute long “When I Fall” and another 12 songs performed as a medley) are all songs which have previously been recorded by Millenium, and here have been given new arrangements and of course new vocals. Saxophone player Dariusz Rybka has only bee a full member of the band for a few albums, so he uses this opportunity to show just important he is to the overall sound, adding nuances and touches where they are needed.

This is composed and restrained symphonic neo-prog. They can riff it out when they need to, but for the most part this is polished and restrained, with Ryszard gently guiding the band from the keyboards, as he has always done. The medley doesn’t always flow as it might, but given it is actually all different songs placed together on one track, that criticism feels a little harsh. Marek has been introduced to the fans, so now is the time for the new album! Can’t wait.