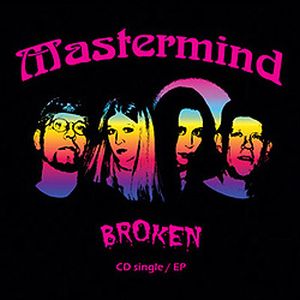 I was having a conversation with Jerry van Kooten (co-founder of DPRP) one day, and somehow the subject moved onto American band Mastermind. Jerry told me he had two copies of the self-released ‘Broken’ EP from 2005, and would I be interested in having one? For those who weren’t aware of the scene in the 90’s, then Mastermind were to my mind one of the most interesting bands around, formed around drummer Rich Berends and his brother, multi-instrumentalist Bill. When they played live then they would use a bassist, but Bill would sing, play guitar and also control a midi at the same time. I was fortunate enough to see them play in London in 1997, and to say I thought they were the band of the night (sandwiched between Ars Nova and Grey Lady Down) is an understatement. But prior to this release their last studio album was in 2000, and the next wouldn’t be until 2010. At the time they were a quartet with the brothers being joined by Laura Johnson (bass, vocals) and Tracy McShane (lead vocals). This 8 track set is more than 44 minutes long, features two songs from the next album (which also feature Jens Johansson on keyboards), with “Broken” repeated at the end as an extended mix, and in the middle there are four songs recorded live in the studio in 2005. As Bill says in the booklet, “This is exactly how it sounds 100% live as if we played in your living room”.

“Broken” starts with a synth pedal which makes one immediately think of “Tom Sawyer”, but it soon shifts into something middle eastern as Bill and Tracy duet and the guitars crunch in a way which makes one think far more of Sabbath than of a prog act. Tracy’s vocals work well with Bill, and she has the power and control of Doro, rising over the top of the band with power and polish. The band had six studio albums behind them by the time of this recording, and although Tracy and Laura were both new at this point, they managed to find room to fit in well with the brothers.

If ever there was a band who deserved to break out of the underground scene then it was Mastermind. Rich comes from the Carl Palmer/Keith Moon school of drumming of hitting everything very hard, multiple times, and it is up to the rest of the band to try and push him into the background as he isn’t going to go willingly. I had to smile when I got to track #5, as this is a take on “William Tell Overture” and as a teenager I bought “Southern Nights” by Glen Campbell just so I could flip it as his version was on the B-side: I prefer this though, with Bill showing just how adept he is on the guitar with plenty of flourishes and Laura determined not to be left behind. It is flashy, showy, but somehow it is contained, and one can imagine Rich having a blast as he powers around the kit.

There are a couple of covers on here, and one of them is Skip James’ “I’m So Glad” and they use the original recording (now in the public domain) as an introduction before they kick in, although it must be said their version owes more to Cream than the original. Bill shares the lead vocals with Tracy, and his guitar is cranked and powerful. Mastermind were a great band, and this EP is a great representation of that.