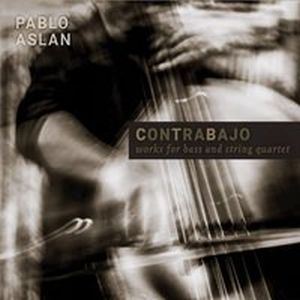 The full title of this album is ‘Contrabajo: Works for Bass and String Quartet’ and that tells you pretty much what you need to know about the album. Double bass player Pablo Aslan has been joined by Cuarteto Petrus (Pablo Saraví, violín; Hernán Briático, violín; Adrián Felizia, viola; and Gloria Pankaeva, violoncello) as well as guests Cuban saxophonist and clarinetist Paquito D’Rivera, and Uruguyan bandoneón master Raúl Jaurena. Aslan is a Latin Grammy and Grammy nominated bassist best known for his love of both tango (he lives in Buenos Aires) and jazz, and here he has combined it with classical music in a form I have never come across prior to this.

This sounds and feels more like a classical album than anything else, and most of the tunes were commissioned for this album, with composer Gabriel Senanes providing some of the music, arrangements and artistic direction. Aslan often takes the lead, either plucking the strings or using a bow, and he can at times be playing complex jazz over the top of more basic classical themes and it makes for something which is compelling. Musically it makes sense, even though my brain does sometimes wonder what is going on as it seems such a strange mix of styles yet works together incredibly well. It feels fresh, inviting, yet there are times when it is emotionally dark and quite draining, such as on “Reflejos”. When the woodwind makes an entrance it does feel far more like jazz as there is more swing, but the album keeps twisting and turning.

Within the digipak Aslan provides information about every song and what it means, which certainly adds to the overall enjoyment of the album. Overall this is certainly worthy of close investigation.