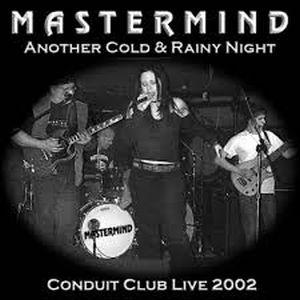 ‘Another Cold & Rainy Night’ captures the new line-up (well it was new back then) in Trenton NJ, November 12th , 2002. As with the ‘Live In Tokyo’ release, it was designed for fans only and was taken from video cam footage. Consequently, the audio quality is of very good bootleg standard as opposed to what one normally expects from a live album these days, but it captures a moment long gone and is so unknown that it wasn’t even listed on Prog Archives! The touring line-up by now was Bill Berends (guitar, midi-guitar, vocals), Rich Berends (drums and percussion), Tracy McShane (vocals) and Greg Hagen (bass), all of whom were involved in the final (to date, I ever live in hope) Mastermind album, 2010’s ‘Insomnia’.

The most recent studio album at the time of this recording was ‘Angels of the Apocalypse’, which was the first time the band had introduced a female singer, in Lisa Bouchelle , and it was Lisa who appeared on the ‘Prog, Fusion, Metal, Leather and Sweat’ live release. She didn’t have as much impact there as Tracy does here, who also sings on older numbers such as “Brainstorm” in its full 26-minute-long beauty. Having another singer definitely takes the stress away from Bill, who has plenty to worry about musically as it is, and this release captures some of his finest shredding to date. He is having a blast, no doubt, while Greg Hagen is providing a much firmer and rock-based bassline while also taking time to add additional melody. Then at the back there is Mr. Rich Berends, surely one of the finest drummers ever, a combination of Phil Collins, John Bonham, Bill Bruford, Keith Moon and especially Carl Palmer: the man is a legend.

This release may well be for fans only, and I would urge anyone new to Mastermind to try some of their other material first, but there is no doubt this is a worthy release and one I have enjoyed immensely. Talking to Bill he tells me he is going to be making more live material available in the near future and that is something to look forward to.