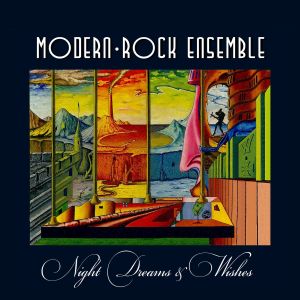 Modern-Rock Ensemble is the musical project of Ukrainian composer, poet, multi-instrumentalist and producer Vladimir Gorashchenko. He described this, their second album, to me as “it’s a 78-minute Suite and it’s dedicated to the guys like me and you, who are dreaming and are making their dreams come true.” Sean Timms (Unitopia, Southern Empire, Damanek) assisted Vladimir in mixing and sound production, Brody Green (Southern Empire) played drums on a number of pieces, while well-known guitarists Enver Izmaylov and Max Velychko (Karfagen, Sunchild) were also involved. Vladimir also brought in many other Ukrainian rock and jazz musicians while also inviting strings, with the string quintet going through a transformation from chamber music to hard rock and avant-garde.

One thing I have always enjoyed from non-Western progressive rock bands is the way they often don’t conform to what is expected from them, and consequently they can often be seen to being more true to the idea of pushing musical boundaries as opposed to rehashing ideas which were seen back in the Seventies. That is certainly the case with this album, as the songs can be incredibly varied one to the next, so much so that sometimes I found myself checking I was still on the same album. There are also long instrumental passages and songs, with flute sometimes at the forefront and others it is guitar, while the drums also play an important part. This is complex and complicated music which is all over the place in terms of influence yet is somehow also enjoyable, majestic and accessible the very first time it is played. It is mixing jazz and prog with eclectic styles and is all the better for it.

According to the ProgArchives charts, where anyone can rate/review, this is the #2 progressive album from Ukraine of all time, above the likes of bands I really respect such as Karfagen and Sunchild, which shows just how well this has been accepted by the prog community at large. I am known for being contrary and always making up my own mind and not following the herd, which is oh so boring, but I must confess I can see why this has been so highly rated by so many, Strong production, interesting songs with great musicianship and a knowledge we are all being taken on a musical journey. We have no idea where we are going, and certainly no clue as to the musical paths we are going to follow to get to the end, but it is going to be enjoyed all the way. I felt I was walking in a forest, the light coming through the trees, walking slightly downhill so it wasn’t strenuous and coming across streams, waterfalls, deer and rabbits playing, not knowing when I would get to the edge of the woods but enjoying every minute. Well worth investigation.