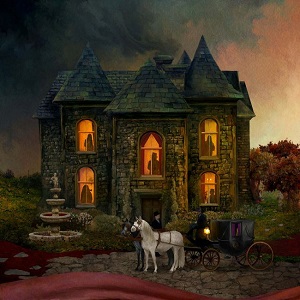 Mikael Åkerfeldt and his merry men are back with their new album, available in either Swedish or English, or in a set comprising both discs. Actually it was originally envisaged that it would only be available in Swedish, until it was decided that possibly those that didn’t speak the language (i.e. most of the rest of the world) may be put off by not being able to understand the words. I don’t think anyone really knows what to expect from Opeth and a new album anymore, as there is a refusal to conform to any preconceived ideas, and certainly they have moved a long way since David Isberg (vocals) and Åkerfeldt (guitars) joined forces to create the “most evil band in the world.” Of course, Ishberg left only a few years after the band started, but these days keyboard player Joakim Svalberg is the most recent addition, joining in 2011, so there has been a great deal of stability in the ranks in recent years.

When I first heard ‘Ghost Reveries’ back in 2005 I couldn’t stop raving about it as it was a revelation, but since then I have learned to let each Opeth album just drip into my brain and not have any set ideas about what it is supposed to sound like before listening to it intently and repeatedly. This time around we have a band who in some ways sound like a modern Deep Purple when they jam such as on “Heart In Hand”, yet at others they display their Floydian influences and at yet others are far more like Tangerine Dream. It is an album which is incredibly diverse, mature, and absolutely fascinating. The production is sublime, and the acoustic guitars really shine on this, while Åkerfeldt is singing better than ever. It is highly polished, but not so much that one loses sight of the real emotion and desire behind this dynamic approach. Sure, if one were to hear just this album and no other then Opeth would be clearly described as being a progressive rock band with just a few metallic tendencies, which is a long way from the death metal act they started out as. Some bands lose fans as they change, and that has certainly been the case of me personally with Marillion and some others, yet I find each Opeth release to be an interesting event and always joyous.

Highly accessible, diverse with loads of different influences, this is an album any rock fan should listen to with open ears before making any calls on whether they are going to like it. Forget the name Opeth on the front, and just give it a good listen, as this really is a very good release indeed.