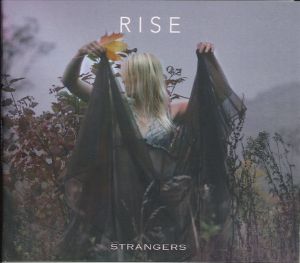 Since the release of her debut album, ‘An Abandoned Orchid House’, Talitha Rise has shortened her name to RISE, but I am more than glad to say that musically she has carried out in a very similar vein. In my review of the debut I said “the arrangements are such so that there is enough going on to pique the listener and want them to spend time unravelling it all, but always at the top of the mix is that wonderful voice, intimate and personal, as if Talitha and the listener are the only people in the world. This is quite some album.” To be honest, I could have lifted those and applied it to this one as well, except in many ways this is even more special. I listened to it on headphones again while going on a walk yesterday through the empty streets as well abide with lockdown. I came across just a few people doing the same as me, and we all nodded and smiled at each other, making sure we were always at least 2 metres apart, and the soundtrack playing in my head was perfect accompaniment as I felt I was all alone in the world with just that voice for company.

RISE said: “David Gray once wrote a line that has stuck with me - “and when we meet again, we will be strangers”. That, in a nutshell, is the idea behind this album. This album traverses the challenge of the personal ‘abyss’ and the emergence from the bleakness of loss and separation. This gives way to hope, wisdom and the taking of responsibility.” The album wasn’t recorded in a studio, as RISE worked distantly with her live band and guests such as Peter Yates (The Fields of The Nephilim) and then worked on each track in the seclusion of the west coast of Ireland. In some ways it is reminiscent of Talis Kimberley, or Enya, or Kate Bush, or Suzanne Vega, or none of the above or all of them. This is an album of atmosphere, of being, of being surrounded by a magical mist where everything works together to create a shimmering backdrop for that voice, for that pure voice.

When I listen to this album, I am taken to a magical place, up on the moors, in the wilds, where there is just me and the landscape, at one with nature. Some songs are basically just RISE, while others have additional musicians, all coming together mixed and melded so the voice is always at the forefront, “Radio Silence” reminds me somewhat of Alabama 3 with a more countrified approach, but their emotion was far more cracked and less poignant, less welcoming. There is percussion on some songs, not on others, guitar the same, while piano is also important, but this is all about the vocals. This is music which takes the listener away from reality, where the only limits are our own imagination as we are taken into magical realms.

Yet another truly incredible work.