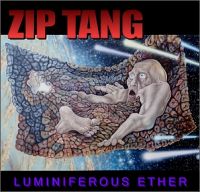 Before even listening to the debut album from Zip Tang, which was released in 2007, I was mighty impressed. The artwork on the digipak is superb, and when one realises that this is a self-released album then there is the realisation that someone has put a lot of effort into it. That feeling only intensifies when actually listening to what is on offer. The four man line-up have all been playing music in bands for quite some time, and have come together with a love of wanting to provide something new and that the definitely do here. There are times when they are blasting out in good hard rock fashion, but even that is tempered by keys or sax, or they are bringing in healthy elements of Zappa and taking that on a journey with Proto-Kaw. One thing I found fascinating is their closing song, a cover of “Tarkus” that is treated both reverentially and deconstructed into a Zip Tang number.

This is powerful stuff, music that is truly progressive as it refuses to be pigeonholed into any particular area and is always driving forward. The proghead can only listen to this with a smile on his face as it hits so many bases. It is not often that prog music really defies categorisation or comparison but with this release these guys have done it. Intense and complex, at times simple and spacious, this is progressive music that demands to be heard.