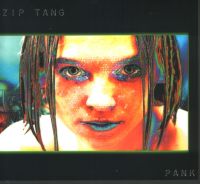 Pank is Zip Tang’s second album, released in 2008 (so hopefully that should mean that there will be another one soon!). As with the debut, again we have a digipak with great artwork, and the same four guys kicking hard into music in a style that is definitely their own. Yes it is possible to bring in comparisons (this time possibly some elements of Mr So & So?), but this is a world of their own creation where jazz, prog rock, hard rock and art rock collide. “It’s In My Head” has moments of incredible intensity that is offset by far quieter passages, so that the listener is drawn in – not wanting to miss anything. I find it incredible that the band have yet to be signed to a fairly major label as there is no doubting their skills or abilities – what they need is to somehow get their name in front of more people because I can guarantee that if you are a proghead in the truest sense of the word, not someone who wants rehashed neo-prog time and again or prog metal then you need to hear music that while very much of the current time also has its’ feet truly set in the ideals of the golden age.

Rick Wolfe, Perry Merritt, Fred Faller and Marcus Padgett have a lot to answer for. The main case against them is that they have released some of the most inspiring and true progressive music that one is likely to come across. All that you have to do now is go out and discover it. Wonderful stuff.