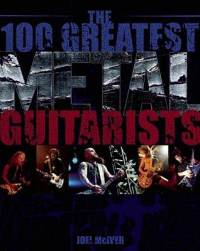 There will always be a problem with lists in that they are the view of a select group of people and others will not agree with them. In this case the list has been created by just one person, Joel McIver, so no-one else will agree with his placements. Also, here we have the problem of genre definition. It is quite easy to state that Children of Bodom or Cannibal Corpse belong in Metal, but when it gets closer to Hard Rock then the boundary gets blurred. I don’t believe that The Scorpions are metal, and I won’t be convinced otherwise, and I certainly don’t think that Rudolf Schenker is a better guitarist than his brother, but as with all things listwise it is all down to personal taste. So from the statements it is fairly obvious that I don’t like the book. Right? Wrong. While I may not agree with certain parts of this, there is no doubting Joel’s love of metal, his technical knowledge of the music he is discussing and his extensive knowledge of the scene in general.

He discusses at depth why he is including each guitarist, his rationale behind the placing and music that can be played so that the reader can understand why he feels that the placing is correct. The result is a book that any metalhead will get a great deal from. Joel has understood that many people may not understand all of the technical reasons so he has tried to keep that to a minimum, but enough so that musicians would be able to take his rationale to the next level. At the end of the list (no I’m not going to say who is number 1 – and while I understand his reasoning I would have thought that based on his own criteria it should be Iommi who was a lowly sixth), there is some small analysis and an honourable mention of the next 50. He has looked at bands from the birth of metal to the current day, so newcomers such as Trivium are here, and the depth and knowledge of the subject matter is unquestionable.

Required reading for all fans of the genre.