McIver, Joel - To Live Is To Die [book] (English version) 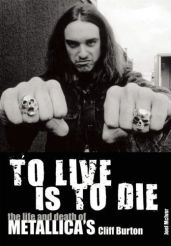 There are only a few times when a biography can be said to be ‘definitive’, and that certainly is the case here. Joel is obviously a huge fan both of Cliff Burton and Metallica, and this biography of the bassist leaves no area untouched and has been put together from extensive research and interviews. The reader is taken through Cliff’s life, how he became interested in bass guitar, his influences and passions, and by the end of the book the reader has a much better idea of Cliff the person behind the music. Obviously Joel also writes about Metallica, but only as it pertains to Cliff. If the reader wants to know more about the band’s story then there are plenty of other books that cover that in detail (including one by Joel), but this is the story of Cliff Burton and of a life brutally cut short by the tourbus crash on September 27th 1986. I have to confess to having never really got into the band in a huge way, but this book has inspired me to find out more about the material Cliff recorded as thanks to this book I now feel that I know him so well.

It is a book that anyone who enjoys reading musical biographies will get a great deal from, even if they know little about the band themselves. It is inspiring, it is exhaustive, it is informative, and most of all it is a damn good read that I found hard to put down. If you have ever nodded your head to the odd Metallica song, or have wondered just who was this guy who people still talk about in awe (just read the quotes from Mikael Akerfeldt, Dave Ellefson and Alex Webster on the rear of the book) then this is essential. Given that there is a foreward from Kirk Hammett one can say that this also gets the stamp of approval from the band. Undoubtedly one of the most important biographies released covering this style of music.