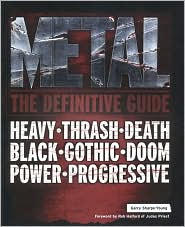 Within my small but perfectly formed music library, I have ‘The International Encyclopedia Of Hard Rock and Heavy Metal’ which came out in 1983 (with Mick Box on the cover) and Vol 3 of the same which was released in 1991 (with Axl), both written by Tony Jasper and Derek Oliver. Since those rather naïve times, metal has expanded to become a many headed monster where even the subgenres have subgenres (Melodic Death Metal for example). The result is a musical scene where although there are some great magazines (sadly none of which are published here in NZ and cost a fortune on import), but it can still be quite hard to uncover all of the great music that is out there. My advice to anyone trying to find out what to listen to then this is a great starting point for anyone. We have nearly 500 large format pages with bands history and discography laid bare for all to see. To start with I picked some bands I know well and went through the information provided extremely closely. It was great to see that not only could I not find any mistakes, I was actually finding out new information on bands that I thought I knew in detail.

From there it is just one short step to starting at page 1 and trting to read it all the way through. I say trying as there is just so much detail! It is very well written but halfway through the section on American Thrash Metal I realised that I could be reading this for many weeks to come! Instead I have been using it as a reference guide for new (to me) bands and finding it invaluable. Yes, I culd argue that there are some bands missing that should be in there, and some included that shouldn’t be, but that is down to personal taste.

Yet again here is a Jawbone release that is absolutely essential for any fan of the genre.