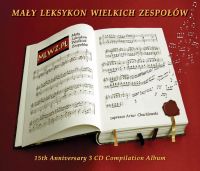 If you are unfamiliar with Polish prog radio then you may well ask who or what is Mały Leksykon Wielkich Zespołów? The answer is it’s the title of Radio Alfa Krakow’s progressive rock show broadcast on 102.40 FM every Wednesday between 8:00 and 10:00pm (central European time). In English it translates as ‘A small lexicon of great bands’ and has been in existence since November 1994 (hence the anniversary) hosted by Artur Chachlowski, who is also a contributor to the Polish edition of Metal Hammer magazine. This 3 CD compilation consists of mostly rare and previously unreleased tracks donated by artists from around the globe who have featured on the show since its inception.

Unsurprisingly this set features the well know to the not so well known but the vast majority of the acts will be familiar to DPRP readers, if in name only. No problems with the opening band on Disc 1 of course, this is Pendragon in all their formative glory and the 1996 neo-prog epic Guardian Of My Soul. The Roine Stolt fronted Agents Of Mercy bring things firmly up to date with a remix of the title song from The Fading Ghosts Of Twilight although to my ears it differs hardly a jot from the album version. Riverside’s offering is a gutsy live version of Dance With The Shadow which originally featured on their 2005 studio album Second Life Syndrome. Abel Ganz contribute an abbreviated ‘Mick edit’ of Sheepish, so called because it features Mick MacFarlane on lead vocals as opposed to Hugh Carter who sang on 2008’s Shooting Albatross album version.

Magic Pie’s Without Knowing Why is a deft combination of hard rock and vintage prog as featured on their 2005 album Motions Of Desire whilst Final Conflict’s muscular The Harlequin is an original MLWZ mix. King Of The Mountain, a catchy song from Cannata’s 2006 Mysterium Magnum album is followed by the equally tuneful Odbity Od Swiatła from RSC and another recent MLWZ mix. Dial’s melancholic Green Knees is taken from their 2007 debut album Synchronized whilst Frameshift’s 2003 Unweaving The Rainbow album should be familiar to DT fans thanks to James LaBrie on lead vocals represented here by the majestic La Mer to close Disc 1.

Roswell Six kick start Disc 2 with their anthemic Here Be Monsters from the recent Terra Incognita: Beyond The Horizon album followed by Airbag’s previously unreleased and Porcupine Tree influenced Speed Of Light. Also making its debut here is the memorable Moje Zapomnienie by the prolific Quidam whilst Red Sand’s recent epic arrangement of Children Memory is clearly indebted to early Genesis Parallel Or 90 Degrees’ moody Embalmed In Acid is a highlight off their 2008 compilation A Can Of Worms contrasting with a recent live version of the joyful Sacred Run which originally appeared on the stunning Solstice album Circles.

Kayanis’ Aurora Abbandonata from the 2007 album Where Abandoned Pelicans Die is an unexpected orchestral highlight whilst the multi-textured In Blue by La Tulipe Noire receives its first airing here. Galahad’s beautiful Hindsight is part 2 of the piece that graced their 2002 album Year Zero and also edited is Summerland which originally featured on the 2008 self titled debut project by Lunatic Soul. High Wheel’s stomping rocker Hate Hounds closed their 2006 live outing Live Before The Storm but here Gazpacho have the final word on Disc 2 with the Marillion flavoured Chequered Light Buildings from 2007’s Night album.

Magenta open Disc 3, represented by the less than typical Speechless (albeit the superb extended version) before stepping aside for The Black Noodle Project and a 2009 live performance of the Floyd tinged She Prefers Her Dreams. Martigan contribute Much More from their latest album Vision, a pure slice of prog bombast where the melodramatic vocalist has clearly been listening to Gabriel and Fish. Wojtek Szadkowski feat. Peter provide a change of mood with the mellow and appropriately titled Dreaming whereas The Watch return to the land of Gabriel era Genesis with the multi faceted Damage Mode lifted from 2004’s Vacuum album. Millenium’s strident, synth led I Would Like To Say Something is a new version of the song that originally appeared on Vocanda in 2001 whilst The Reasoning contribute the metallic title track from their highly rated 2008 album Dark Angel.

Moon Safari’s folk-meets-Yes Lady Of The Woodlands is a short but welcome addition from 2008’s curiously titled [blomljud] album and also from the same year is Shadowland’s gothic neo-prog Edge Of Night, written by Clive Nolan to celebrate the band's reformation. The song is featured on the band's A Matter Of Perspective compilation whereas the delightful and Beatles-esque Waisted by Over A Thousand Miles has yet to find a home but deserves one. We enter the home straight with Damian Wilson’s lush and romantic Just The Way It Goes which added a touch of class to his 2001 Disciple (Grow Old With Me) album. Bringing up the rear in fine style is the memorable I’m Coming Down (I Shall Go Back) from The D Project (and 2008’s The Sagarmatha Dilemma album) whose singer has more than a hint of Roger Waters in his vocal chords. Having the final word however is Artur Chachlowski who (in Polish and English) thanks everyone that has supported his cause over the past 15 years.

Artur Chachlowski is a man I clearly have an affinity with. Similar to myself he is by trade a mechanical engineer and like myself he isn’t a professional DJ or journalist, the promotion of prog is something he devotes his spare time to, a testimony to his passion for the music. Whilst several of the bands featured here have obviously been around for sometime and made a name for themselves (Pendragon, Galahad, Magenta etc.) there are no ‘heavyweights’ like Yes, ELP, King Crimson etc. Clearly the intention wasn’t to compile a ‘who’s who’ of prog but rather to provide an effective sampler of the rich diversity to be found in the current and vibrant prog-rock scene. With that in mind Artur has been wholly successful and with several countries represented it’s also a tribute to the global impact of the music. From the DPRP’s prospective it’s pleasing to note that the majority of the acts have been favourably covered on our pages as the album links within my review will testify.

(written for the DPRP web site)