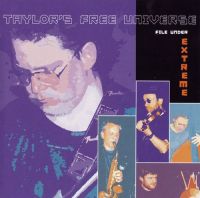 So, from his previous album which had been carefully constructed by one man we move to an album that was recorded on 28th January 2002 (although there were some subsequent overdubs) with a group. Here Robin was joined again by Karsten, and also by Pierre Tassone (violin, electronics), Johan Segerberg (double bass, electronics) and Kalle Mathiesen (drums, samples). When it states ‘File Under Extreme’ it really does mean that. What we have here is Present-style RIO melding and moving with free jazz – anything goes, and it does. This isn’t music that is meant to be gentle and laid back – this is music that is defiant and full of dischord, music that is challenging – almost daring the listener to turn it off.

But, if this style of music is what you enjoy listening to, then these guys show how it should be done. The interplay and complexity is breathtaking and the feeling very much is of a band that is really cooking. Robin is well known for the use of space and minimalist approaches, but there isn’t room or time for that here as each musician is out to make a point while at the same time contributing to and not detracting from the whole. Karsten has been given full rein to go berserk and the note density he generates at times is incredible, but all of the guys here more than hold their own – each taking turns to be the front man. This is music at the very edge, only just together, and at times is nothing short of genius.