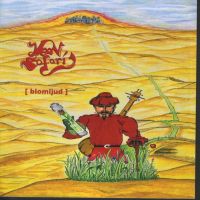 I was playing this wonderful album yet again the other day when I realised to my horror that for some reason I had never got around to reviewing it, which is why I am now in 2010 writing about an album that was released in 2008. When Sweden's Moon Safari released ‘A Doorway To Summer’ in 2005 they made an immediate impact on the prog scene, with their highly layered and complex vocals which reminded me, at least, of The Carpenters. Combine that with strong songs and great musicianship and it was a marriage made in heaven – wonderfully melodic and easy to listen to but with many layers and complexity. The question was would they ever be able to follow it up? Well, they are back with a double CD that in many ways surpasses the debut! Anthon Johansson has left to be replaced by Pontus Åkesson (guitar/vocals), and the rest of the guys are still Simon Åkesson (keyboards /vocals), Petter Sandström (acoustic guitar/vocals), Johan Westerlund (bass/vocals) and Tobias Lundgren (drums/vocals). Yep, vocals are definitely important to these guys.

The music is so harmonious that there is always the risk of falling into a cloying saccharine parody of the genre but these guys are so adept at what they are doing that instead they take the music into pastures new. There are elements of many bands in what they are doing, with The Carpenters and The Beach Boys being major parts, while progheads may be thinking of laid back Genesis or The Moody Blues as a point of reference. This isn’t an album where you are going to find dischord and punishing riffs or massive changes in direction, bur rather somewhere the music is very much thought out and every note has its place without wanting to cause friction with another.

This is very much an album where the song I am playing is my favourite. There are more than 100 minutes of music spread over the two discs, and even then it is way too short. Whereas some bands just drag the music out and you wish that you could edit it for them, here it is just passes far too soon. This is music to play on a Summer’s night, looking at the stars and hearing the moreporks (our only remaining native owl here in NZ - in Māori tradition, the morepork or ruru was often seen as a watchful guardian. As a bird of the night, it was associated with the spirit world. Its occasional high, piercing call signified bad news, such as a death, but the more common ‘ruru’ call heralded good news).

While this album is filed with the sounds of joy and beauty, it belongs in a place where there isn’t too much light so that the listener can lose themselves in a most wonderful world. This will be appreciated by fans of any of the bands mentioned, but also by so many more. You owe it to yourselves to hear this.