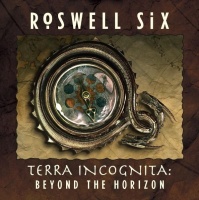 This is an interesting album in many ways, and not all of them musical. Well-known author Kevin J.Anderson has long had an interest in progressive rock music and in 2007 he was working on the first Terra Incognito novel when he was contacted by Shawn Gordon of Progrock Records. Shawn introduced him to some of the bands on the label and the idea came up of Kevin being involved with an album that would be based on the new book. Keyboard player and composer Erik Norlander became involved to write the music while all of the lyrics were written by Kevin and his wife Rebecca Moesta. Of course this is a concept album, but on a rather more grand scale than most. To do justice to the vision Erik brought together a great group of musicians including four vocalists, so while Erik provided keyboards and his wife Lana Lane was one of the singers the rest were James LaBrie (Dream Theater, Fates Warning etc), Michael Sadler (ex-Saga) and John Payne (ex-Asia) and they were joined by Kurt Barabas (Under The Sun, Amaran’s Plight) on bass, Chris Quirarte (Prymary) drums, Gary Wehrkamp (Shadow Gallery) electric guitars, Chris Brown (Ghost Circus) acoustic and additional electric guitars, David Ragsdale (Kansas etc) violin, Mike Alvarez on cello and Martin Orford (ex-IQ, ex-Jadis, John Wetton) on flute.

I’m not going to talk to the story of the album, as you can buy the book to get the full details, but to put each song in context there is a passage before the lyrics for each one in the booklet so that the listener knows where the story is going. To be honest though, this album stands up very well indeed on it’s own. The first I played this was when I was working on the land and I think I smiled throughout the whole thing – it is immediately incredibly impressive. I have long been a fan of Erik’s work, and love Lana’s vocals so to have it all brought together with this wonderful group of musicians with great songs was just amazing.

Subsequent plays found me studying the booklet and lyrics, getting the most out of the storyline, enjoying the artwork etc. This is symphonic prog with many of the elements of Erik’s past music that has made him so popular,  combined with elements of Ayreon that definitely allow the guitarists to shine without fully moving into the realms of prog metal – although there are times when they come close!!

Many progheads enjoy reading fantasy, it seems to fit in well with our mindsets, and I am sure that Roger Dean and Rodney Matthews have a lot to answer for in this regard as well. In fact, I am currently reading Terry Brooks but for some strange reason have never read any of Kevin J. Anderson’s books. I am going to remedy that by buying ‘The Edge of the World’ to see how these guys have brought that to life. Let’s hope that there are more in the pipeline as it would be criminal if this is the only release. A wonderful album from the first note to the very last.

Galahad Electric Company - When The Battle Is Over

Dukes Of The Orient - Freakshow

Apogee - Endurance Of The Obsolete