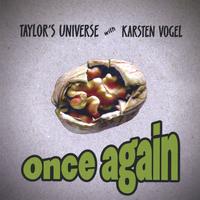 ‘Once Again’ was Robin’s 15th album, released in 2004, and again is credited to Taylor’s Universe with Karsten Vogel. Alongside Robin and Karsten, this time we saw Kim Menzer (didjeridoo), Pierre Tassone (violin), Louise Nipper (voice), Mads Hansen (drums), Rasmus Grosell (drums) and Kalle Mathiesen (drums). This was the first time that Mads had recorded with Robin since 1996’s ‘Pork’, and he was of course also involved with the very first Taylor’s Universe album ten years prior to ‘Once Again’. The album starts with some didjeridoo before again working on expanding the listener’s musical boundaries. This is quite different music to that from Taylor’s Free Universe, not nearly so challenging, yet mixing jazz and prog in a way that is always guaranteed to ensure that one has to actually think and pay attention.

There are a few minimalist pieces here that are just superb, with sections of “Way Back in ‘85” reminding of me of some of Roger Eno’s best works with simple repeated piano lines, but this piece in particular moves and melds with sax and fuzzed guitars to give it new life. Overall this is a very enjoyable album, and while not as essential as some of Robin’s other albums is certainly worthy of further investigation.