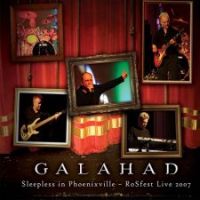 Through the years Galahad have often been linked with Poland, and for some reason of which I am not aware, it is through a Polish label that they have released this double CD digipak of their 2007 appearance at the American RosFest. Of course the main fare on offer is from ‘Empires Never Last’ and ‘Year Zero’, but we do get treated to a great version of “Bug Eye” from ‘Following Ghosts’ and two songs from ‘Sleepers’ with both the title track and the classic “ Exorcising Demons” with just “Lady Messiah” from the very early days. Once upon a time I would not have been able to imagine a gig without “Room 801”, “Richelieus Prayer” and “Aqaba”, but the band have moved on so much and now have such a depth of wonderful songs that obviously there just isn’t room.

This is the strongest of their live albums just because of the material they have to offer as well as the tightness of the band. Roy plays with much more fire these days and Dean’s attacking keyboards gives the band an edge that many other within the scene would love to command. While not forgetting the rhythm section who drive the band along, the main other factor in this band had to be Stu’s vocals. He shows no sign at all of slowing down and from looking at the gigs coming up on their website obviously has no intention at all of doing so. He has always had great pitch and control and relishes performing in front of an audience, as anyone who has been lucky enough to see the band over the years will attest to. But here he is on top form, just listening to the final notes of “I Could Be God” shows his confidence and ability.This album really does belong in any progheads collection and check the website for upcoming gigs. Lee is no longer with the band, but his replacement is none other than Neil Pepper who has been welcomed back into his old role.