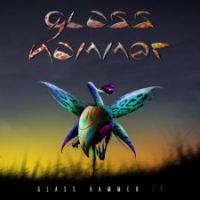 Over the years the duo of Steve Babb and Fred Schendel have had a somewhat rotating door policy to musicians and styles, but here they have gone back to what nay fans are going to love, namely classic progressive rock in the style of Yes. Now, it is in the style of as opposed to going out and copying what has gone before – and surely they have been paid the ultimate accolade by that band, as not only has Jon Anderson appeared on a previous album but the vocalist on this 2010 release is Jon Davison – who is currently the newest member of Yes, replacing Benoit David for the 2012 Australasian tour. Now, as I was lucky enough to see Yes in Auckland recently I know just how good Jon D is in a live environment, so it is of course no surprise to hear him to be more than up to the task in the studio.

They may not have a Roger Dean cover, but in Tom Kuhn they have someone who again has prepared something in the style of as opposed to just rehashing something that came out thirty or more years ago. I read one review where a comparison is made between Glass Hammer and Citizen Cain and that makes quite a bit of sense – when CC was releasing albums in the early Nineties there was quite a lot of flak as it was stated that they were just doing what Gabriel had done with Genesis, but it has to be remembered that Peter had long left the band and the Genesis of 1992 wasn’t anything like CC. Now, I really like ‘Fly From Here’ but this probably has more in common with the traditional Yes sound than that – and after 20 years GH still has the same two people at it’s heart yet it took far less time than that for Chris Squire to go through two drummers, three keyboard players, two singers and three guitarists.

Anyone playing this or writing about this is going to compare Glass Hammer to Yes, but that isn’t a bad thing. The question is not why does that have to take place, but more why on earth isn’t this band better known and spoken about with the same reverence? This is a great album, whatever name is on the cover – if you like Yes then this is five stars and essential, if you don’t then don’t bother, but it is your loss.