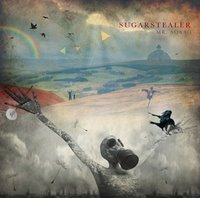 So there I am working my way through a load of files and I came across a press release for this album. “That can’t be right” I thought, “I reviewed this years ago”. A quick check later and it appears that this one fell through the cracks, for which I am both very annoyed and embarrassed. The only thing to do is to right the wrong and get on with it now.

Well, who exactly are Mr So & So? To answer that you have to go back to 1991 when they released the cassette ‘Thoughts of Fear & Principle’ (yep, still got my copy), which was recorded at Pagan Media. Steve Paine saw promise in this group of young lads and offered them a deal, and a year later they released their first CD ‘Paraphernalia’. What made these guys so very different to the rest of the prog bands around was that not only were they all extremely talented at a young age, but also that their sound was based around bass/guitar interplay as opposed to keyboards. Drummer Leon Parr and keyboard player Kieran Twist were great musicians, but it was guitarist Dave Foster and bassist/singer Shaun ‘Magoo’ McGowan that gave them the edge.

The next album was ‘Compendium’ where the band became a five-piece with the addition of another singer in Charlotte Evans. It was about this time that I saw the band play live for the first time, supporting John Wetton, and they had their slot cut short as they were going down so well! Steve Rothery entered the story at this point, and he signed the band to his own label for their next album ‘The Overlap’ and they found themselves as the support act for Marillion on their ‘This Strange Engine’ tour (I caught them at Shepherd’s Bush Empire and they were just stunning). But, the album wasn’t ready in time for the tour and in 2000 the decision was taken to fold the band. Dave, Charlotte and Leon formed Sleeping Giant (whose album ‘Primates’ is well worth grabbing if you can find it) and played some gigs (I managed to catch them support Karnataka, and there is no doubt in my mind who should have been supporting who). But, in 2005 Dave and Shaun met, and after some discussions started playing music together again. Charlotte became involved and the decision was taken to resurrect Mr So & So. Kieran and Leon weren’t available, but they managed to find replacements in Anthony Hindley (keys/vocals) and Stuart Browne (drums).

And so, in 2009 they released ‘Sugarstealer’. To say I was nervous when playing this for the first time was something of an understatement. Back in the Nineties Dave and I often spoke to each other, I had travelled many miles to see them in gigs, I had even given a flexi of theirs away in ‘Feedback’, and these days we were friends on Facebook! What would I do if I didn’t like it?

Luckily that was never an issue. From the first note it was just like old times, yet way more polished and mature. I did sometimes use to have a concern with how Charlotte would be able to make room for herself in a band so tightly musically dominated by Magoo and Dave, but here the balance is just right. There are passages where Charlotte is absent, or just providing backing vocals, and others where she is centre stage  – it is all about balance. I remember Bill Bruford saying that he once received a songwriting credit in King Crimson for a song where he didn’t play – his decision to be absent made the song what it was, and that is the same here. The guys have grown up and there is no need for anyone to be wrestling to be above anyone else, it is all about the end result.

There really is no prog band that sounds like these guys, they have taken the normal prog influences, added Tool, FNM, The Police, Zappa and a while load of others to create a sound that is truly and uniquely their own. They are touring again now, and will be supporting Marillion again in Europe (you lucky, lucky people) with plans to have a new album available at the beginning of 2013.

I should have reviewed this three years ago (and thought I had, honest) – but here it is now. This is a five star album from a five star band. Welcome back guys.