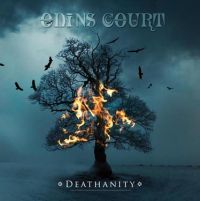 I have had some real struggles to try and write this review, and have scrapped it a few times, but it’s time to give it another shot. There is some incredible music on this 2008 prog metal album, with the guys showing that they can lock horns and provide shredding complex melodies as good as anything you may find on Poverty’s No Crime or Presto Ballet for example. There are some spoken word passages in places, the music darts and drives into different stylistic areas with complex changing time signatures, counter melodies etc…But…(it was fairly obvious that there was a “but” coming) it just isn’t all that it could be which is a great shame. It’s just that it doesn’t all work all of the time. Take Matt Brookins vocals for example, there are many times when the vocal style and delivery is absolutely perfect for the accompaniment, but there are other times when it jars.

Overall this is not as much a killer album, but one that promises what could be if there was a producer strong enough to keep everyone focussed and to cut out the elements that detract. That being said, it is still worth investigating if you like your prog good and heavy you may just come way disappointed.