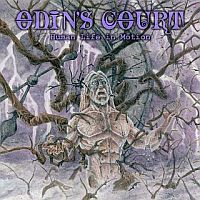 In 2011 Odin’s Court released their fifth album and to say that they had moved on from the previous release is something of an understatement. This is a band that is highly drive, focussed on the job in hand, and know what just needs to be done to produce a great prog metal album. Rick Pierpoint is a stunning guitarist but he can be matched note for note by bassist Craig Jackson and they both mix and change their styles while at the same time providing incredible shred. Drummer John Abella is no slouch behind the kit, providing a dynamic backbone that allows the rest of the guys to keep moving on, while singer Matt Brookins is now in perfect harmony with what is going on musically.

I originally thought that it would take an external influence to pull this band in the right direction, but Matt stood up to the task and engineered, mixed and produced it himself. This is powerful prog metal that at times has more than the latter than the former, but never losing the melody and complexity. Whereas those into prog metal may be disappointed with the previous release, this is a killer and needs to be played loud. Very loud.