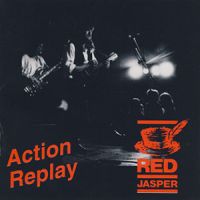 On 26th January 1992 Red Jasper took to the stage at the Fleece & Firkin in Bristol with the intention of recording the gig for posterity. This was the second time of asking as the equipment had failed during the originally planned recording at the end of 1991, so this was the ‘action replay’. At this time the band didn’t have a recording contract, although their previous release ‘Sting In The Tale’ had been well received, so they felt that a quick way to get more product out was to release a live set. The line-up had also changed, with Davey Dodds (vocals, mandolin etc), Robin Harrison (guitars) and DC (drums) being joined by bassist Jon Thornton. But they felt that they ought to expand the sound again (previously having sax and keys etc), so roped in keyboard player Lloyd George (of Just) to guest for this night only.

The result is an album that has really stood the test of time and is still as lively and vibrant 20 years down the line as it was on that night. There was/is a very Englishness about this band that was matched by very few in the prog scene, and probably their only real contemporaries in the underground was Grace, but these guys really knew how to put the ‘rock’ into prog rock. The band have been compared to many others, but really they had no comparison. Of course people who haven’t heard them do need a pag on which to hang their musical hat so to speak, so let’s say that they had the folk and balls of Horslips, as well as the whistle and keyboards (and even perform ‘The King Of The Fairies’) yet at times come across as a metallic Jethro Tull. There is a venom in Davey’s vocals that provide a harsh edge to proceedings; the folk/punk ethic combining strongly.

It is great that this album has now been made available on CD at long last. No bonus songs, but there is an incredibly well-written booklet……