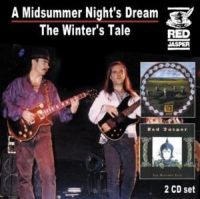 After the release of ‘Action Replay’ the band hit the road again and also managed to secure a distribution deal with the Dutch label SI Records. The record sold so well that label boss Willebrord Elsing offered the band a three album deal. This was the first time that they had been given the luxury of being able to spend time writing something that would hopefully appeal to a wider audience, and as they were seen as an English band why not Shakespeare? Both of these albums were released in 1994, and they are often viewed as part of the same piece so it makes perfect sense for Angel Air to reissue these together as a double set. The band were by now working really well together, having again been gigging hard, with ‘guest’ keyboard player Lloyd George now very much a full member of the band.

These two albums were extremely complex, both lyrically and musically, but never lost the punch and power that RJ had built their reputation upon. Yes there were crunching guitars, but there was also delicate mandolin, and keyboards rising majestically above proceedings while the bass and drum interplay kept everyone nailed to the floor. I was lucky enough to hear (and indeed review) these albums all those years ago and now, as I did back then, can only wonder why these didn’t lift the band into the heights that they undoubtedly deserved to be. They are a delight from start to finish and Lloyd’s remastering has provided an additional crispness that allows the listener to just sit back and savour everything that is going on.

Two very English albums from a very English band (even the sonnets are true to the original concept with four quatrains followed by two rhyming couplets). Here they have been presented with some additional live songs taken from RJ’s successful European tour, and are a worthy addition to any music lover’s collection. Oh, can I just also mention that the booklet text is particularly fine?