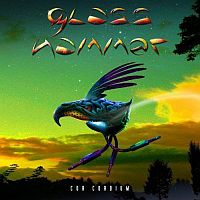 This 2011 release saw Glass Hammer as a four-piece, with additional guests. So, band leaders Fred Schendel (keys, guitars, vocals) and Steve Babb (bass, keys, vocals) were again joined by singer Jon Davidson and guitarist Alan Shikoh. Special mention should be made here of the artwork by Tom Kuhn which is just stunning, even before the CD makes it into the player there is the feeling that the listener is in for something special and it has to be said that the music doesn’t disappoint. Glass Hammer have always been heavily influenced by Yes (as well as Genesis, ELP and Camel), and having current Yes singer in their ranks will obvious strengthen those links, but this is much more than a band trying to recreate 70’s glory days of someone else. True, there are times when the band do sound very similar, but there are plenty of others such as “Salvation Station” which is quite different indeed. Here there is liberal use of acoustic guitar, piano, swirling keyboards, punchy basslines (which have a very different sound to Chris Squire) and just the right amount of lead guitar to provide additional class. Then of course over the top of all of this are Jon’s vocals. He has an incredible voice, lots of melody and control and a very pure clear sound. It is strange to think that he is a relative newcomer to GH, as it sounds as if he has always been there.

Like all great prog albums, repeated playing rewards the listener, and whereas some albums can feel very heavy and somewhat tiring this has a freshness and light that carries the listener along – so much so that during “Dear Daddy” I found myself smiling just because the music contains a real joy. Yet again Glass Hammer have released an album that belongs in every prog lover’s collection and I look forward to the next one with real anticipation.