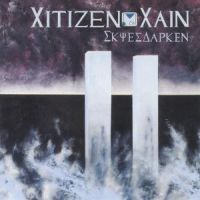 I first came across Citizen Cain in 1993 when their debut CD was released by Dutch label SI Music, but in truth they had already been active for some time before that, appearing on the famous compilation ‘Fire In Harmony’ back in 1985. I was immediately taken by the Gabriel-esque vocals of Cyrus, and the way that the band managed to evoke the spirit and feeling of early 70’s Genesis but had brought them into the 90’s. I was hooked. Over the years there were some line-up changes, and gradually the output slowed with the last release being ‘Playing Dead’ in 2002. Like many I never really thought that there would be another album, although I kept in touch with keyboard player Stewart Bell and often asked the question. So, it was both delight and trepidation last year when I heard that the band were recording again. I mean, after all this time was it going to be any good?

When the disc arrived I opened the booklet to see who was involved, and could see just three names – Cyrus, Stewart and Phil Allen. Annoyingly for me there are no details about who played what, and who (if any) were the additional musicians involved. The Citizen Cain website is still under construction, and the Festival Music site just lists releases so neither are helpful in this regard. I did find a few details on one site where it states that Stewart provided drums as well as keys, Cyrus provided bass (as he did in the early days of the band) and vocals and Phil provided guitars. There is a very simple reason as to why this bothers me, as we need to give credit where credit is due as this is an absolutely stunning piece of work. To put it bluntly, this is one of the finest prog albums you are ever likely to hear.

Put it in the player and immediately the listener is taken aback by the complexity and interplay of the introduction to “The Charnal House”. The maelstrom of notes and complicated inter-rhythms gives way to delicate piano and vocals, and one of the most Genesis-like passages of the whole album. Already the listener is deep inside the world of Citizen Cain, and with less than three minutes on the clock there has been musically a lot to digest. The interplay between the musicians, and particularly the way that the melodies and counterpoints are chased and are at times heavily structured and dense, contrast greatly with the simplicity of other phases of the music. And all of this within one song! Stewart’s keyboards are a revelation, bringing together a multitude of sounds and styles, often layered, and he would need to be an octopus to be able to replicate this in a live environment.

By the time I got to the end of this album I felt that I had been taken on an incredible musical journey, one with a richness and passion to match anything I have heard in recent years. The only sane thing to do after listening to this is put it back on. The more I have played it the more I have fallen into the spell. So it took 10 years for this one, when’s the next? 5/5 in anyone’s language.