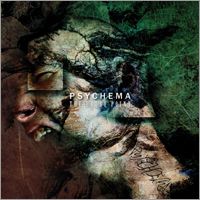 Psychema appeared on the Finnish metal scene in 2007 and within two years their demos were attracting attention, which led to the deal with Inverse Records to release their debut album. The label says that the band could be called semi-progressive metal, and that the album presents even more variations in musical styles with elements of aggression and atmosphere, “with progressive nuances of course”. I probably agree with the latter statement as there is no doubt that prog has had some impact on what they are trying to achieve, but these guys are definitely approaching it from the metal end as opposed to most prog metal bands that do it the other way around. The vocal style is also far harsher than one would normally expect from this genre, and the result is much more Opeth than Dream Theater.

Solid as opposed to groundbreaking, this is an album with large blocks of dark from the twin guitars riffing hard but with enough light from the breaks in style and integral use of keyboards to make it interesting for those who want to play their music loud. Very loud.