Jeremy - From The Dust To The Stars 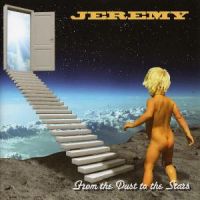 It must be twenty years since Jeremy Morris and I were first in contact. Back then his albums were released on cassette (I still have all of them – just nothing to play them on), and often on his own label Jam Recordings, but his latest effort has been released by Mals and sees him move slightly more into the prog field. Of course, being Jeremy there are also huge slabs of psychedelia and power pop and to be honest it is the former that takes centre stage for much of this album. Also, given that there is a photo of three musicians on the rear of the case one could think that this is a group effort, but apart from two guys sharing drum duties, and recording colleague Guillermo Cazenave on one song, this is very much a solo effort. Jeremy lists his own instruments as vocals, guitars, mellotron, bass, synthesizers, piano, dulcimer, drums before he puts ‘etc’. Yes, he is very much a one man band.

When Jeremy was telling me about this he did tell me that it was a prog album (Jeremy releases normally three or four albums a year, in many different styles) but I’m really not so sure. There are some proggy elements (anything with a mellotron is almost automatically prog isn’t it?) but it is much more a psychedelic piece, with some wonderful layering and atmospheric keyboards and vocals. At times it is quite dreamy, while at others it contains some of the most direct electric guitar solos I have ever heard Jeremy record. Lyrically this is very much a Christian album, with Jeremy using his words to get across some strong messages.

Overall, The result is yet another Jeremy album that it is possible to listen to with a smile on the face – it may not be what a lot of people think of as a prog album, but whatever tag you wish to put on this it is a damn fine listen.