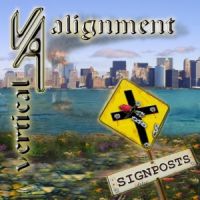 Vertical Alignment group started their activity a few years ago and from the very beginning they tied up with artists coming from the so-called “Christian progressive rock” trend. They made their debut in 2004 with the track “Once In A Dream”, which appeared on double album, “CPR Volume One”. Next to the tracks of relatively little-known artists, there were the tracks of such popular musicians as Rick Wakeman, Kerry Livgren and Neal Morse.

Recently, Vertical Alignment have recorded their first album entitled “Signposts”. This ambitious work of art of this band has a substantial potential, which makes us believe that in the future they’ll do even better and we shall hear a lot of positive opinions about them. What could one tell about this album? First and foremost, “Signposts” contains a lot of sound characteristic of the contemporary neoprogressive music. Secondly, Vertical Alignment members are good compositors and excellent instrumentalists, and the vocalists: Pete Jorgen and Jim Braunreuther are endowed with good, contrasting voices. On “Signposts” we can find quite a lot of a really good music. What’s more, apart from sounds and melodies, in Vertical Alignment’s music, the lyrics are important too. As befits the representatives of the Christian prog rock trend, in their tracks they praise God and the world created by him. They also touch important problems, such as the tragedy of WTC (in “Two Towers” track), the memorable sea disaster (“Ballad Of Titanic), social injustice (“Rented Houses”), or they even reach for ambitious American literature (in “Kingdom Of Summer”, whose lyrics are based on the Stephen R. Lawhead’s novel, “Taliesin”).

„Signposts” lasts as long as 80 minutes, and it contains 9 tracks. Among them, there is an exceptional 16-minute suite entitled “Freedom’s Call”. And despite this record stands out, it doesn’t deserve the title of the most important and beautiful track on the album. These would be “Dress Rehearsal” and “Kingdom Of Summer” in my opinion. What’s important, among the above-mentioned 9 tracks, none is weak or unsuccessful. In all of them we can find positive elements which make us listen to the album with no sign of weariness, but with a good deal of interest and pleasure right to the end.

Despite all these advantages, I don’t think that Vertical Alignment with “Signposts” will break into the top of prog rock popularity. However, in the stylistic “Christian” niche, they will take up a high position for sure. Speaking of niche, let’s take a closer look of the Vertical Alignment’s style.

The band is into the sounds based on powerful keyboards. It’s distinctive that the musicians like the music of the past, and to be more precise, the classical sounds (ELP, Yes, The Moody Blues). On “Signposts” we can hear a lot of non-musical sound effects, such as telephone rings, intercom conversations, a radio speaker. The band also created interesting vocal harmonies (the most interesting in “Children In The Son”), and one of the solos (in “Kingdom Of Summer”) sound as if it was performed by the master Rick Wakeman himself.

A similar style, also concentrated on a past, is characteristic of the other American prog rock groups, which are more popular in Poland. I think that to be as good as, say, Glass Hammer or Proto-Kew, Vertical Alignment have still long way to go, but they could boldly be compared to Divine In Sight, Salem Hill or Avalon. What’s more, the enormous potential, which is in this band, has been already appreciated by Steve Babb, Fred Schendel (both from Glass Hammer), Carl Groves (Salem Hill) and Eric Parker. All of them made a guest appearance on “Signposts”, adding a true color to their music and making this album even more attractive.