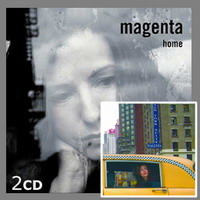 There’s nothing to hide: recently, the entire progressive world is going crazy about Magenta. Their first two albums: “Revolutions” (2001) and “Seven” (2004) made an enormous impression on the listeners and critics, which undoubtedly allowed the band to land in the forefront of the most popular contemporary performers of the genre. No wonder we had been waiting so impatiently for the release of the new Magenta CD. Initial news was that “Home” was to be a double album, but in March, the group’s leader, Rob Reed, informed us that he had decided to condense the material a little bit and put it on one disc. He wanted to avoid the trap of musical longueurs (which is so easy to walk into when you work on such enormous amount of music) and not to make a double album which could be too hard to take in as it could disappoint the band’s fans. According to Reed, the aim of that exercise was to release “a very good single album” instead of only “a good double album”. Did the band manage to succeed? You can find an answer in the following part of my review.

Magenta had one more problem - what to do with the already composed music which didn’t manage to fit in the main body of the new album? Well, the members of Magenta decided to compile it in to one, 5-part suite, “New York Suite”. It lasts 40 minutes and complements the story told on the main album “Home”. So, here we are: the new Magenta CD is a concept album. The album, whose plot tells us the story of a girl who emigrated from Liverpool to the United States at the beginning of the 70’s. She arrives to New York, lives in Manhattan and then travels to the village of Fargo in North Dakota. The journey is full of disillusionments and sad turns of events, but eventually, the heroine finds her real home. Not only as a place to live, but home understood in a broader context. This is the plot of the “Home” album. The episode of her life in Manhattan is illustrated by the above mentioned “New York Suite”. The man responsible for the whole story and the lyrics of the individual tracks is Steve Reed, Rob’s brother. Rob composed and produced all the music and played the guitars, bass, piano, synthesizers and mandolin in turn. On “Home” album he is accompanied by Chris Fry (g), Martin Rosser (g), Dan Fry (bg), Allan Mason-Jones (dr) and Christina Booth, who – thanks to her wonderful voice – has again proved that she is becoming one of the most characteristic elements of Magenta’s style. In the group of musicians who made a guest appearance on “Home”, one is particularly worth mentioning. Firstly, because of his eminent name and undeniable fame, and secondly, because of the beautiful solo played on Uilleann Pipes in the final part of the album’s main song. I’m talking about Troy Donockley, who normally plays with Iona. It wasn’t the first time he had helped Magenta and he has added a real colour and light to their music.

The album consists of 15 tracks, of differing lengths. Some of them, such as “Brave New Land”, “The Dream” or “The Traveller’s Lament” last just a minute or so. The others, such as “Joe” last more than 11 minutes. The music on “Home” is developing rhythmically and fluently and the joins between the tracks are imperceptible. The music itself, with no signs of any kind of monotony, is very coherent - precisely the same as we’ve been used to by Magenta on their previous albums. In these terms, there are no surprises. And this is good, because the band don’t make any unnecessary changes in this tried and tested method appreciated by the fans. It’s difficult not to take your hat off to the Reed’s composing skills. In his mind, there are many wonderful musical ideas, which are a kind of tribute paid to the progressive rock’s best days and to the most eminent representatives of the genre. It’s like this on all the Magenta’s CDs, but on “Home” it’s particularly noticeable, a listener can hear a link to compositions of such groups as Genesis, Yes, Pink Floyd or Renaissance. There are some strong similarities to Pink Floyd’s “Dogs” (the final fragment of “Truth”) or Genesis’ “The Lamb Lies Down On Broadway” (“Demons”, “The Visionary”) – but it certainly isn’t an obstacle in listening to this beautiful and successful album. We should hear the review of all possible symphonic climates - from the lyricism to pathos. However, the band are not only looking back, but they’re boldly introducing new elements to their repertoire (from touching, almost minimalistic vocal interpretation to the accompaniment of mandolin in “Morning Sunlight” or Lee Goodal’s saxophone solo in “Moving On”) – nevertheless, let’s be honest- it doesn’t surprise us. It’s because all those novelties go together well with already tested Magenta convention. It makes us like the CD and its atmosphere after the first listen. Then, at each subsequent listen, its beauty mounts and intensifies. On “Home” there is no unnecessary musical splendour; everything is balanced, logical and fluent. Everything makes sense here.

The album is opened by atmospheric song “This Life” with Christina’s wonderful vocal. Her performance on “Home” deserves a separate mention. Like an actress, she played the role of the main heroine of the album and she did it in a fantastic way, which captures our hearts. Her vocal parts are the real pride of the whole album. After this lyrical introduction, we can hear a rock track, “Hurt” – here the band show us their talent and skills in all their glory. Then, there begins a more complex composition “Moving On”. And then... “Home” is becoming more and more splendid and wonderful. Describing all the tracks one by one makes no sense, because, as I mentioned, they end and begin fluently and virtually imperceptibly. As a result, we receive a 68-minute portion of music, which develops in a clear and deliberate way, reaching its climax in the final track entitled “Home”. But there are more such atmospheric pieces of music on this album, for example “Demons”, “Towers Of Hope”, or the epic “Joe”, which stick in your mind immediately. Despite this, I would say that “Home” is an incredibly even CD, with no weak moments. What’s more, it’s an album, whose message becomes clearer and more emphatic the more we get to know it.

The only problem here is the fact that it’s impossible to choose one track, which could be the centerpiece of the album, or one which could be a “hit” song, for example “Anger” or “Lust” from “Seven”. But is it really a big problem?

Finally, something about the additional CD attached to the main album. It is in it self a musical whole, and is available as a limited edition double CD pack with “Home”. It’s worth remembering that “Home” is a single album and the additional disc complements it, but which can also exist separately (Magenta have said that “New York Suite” will be released as an individual CD in a couple of months time). Another thing that makes the albums different is the fact that Magenta’s music on “New York Suite” is a bit harsher than on “Home”. I guess it’s not so smoothed and in a sense it has more of a similar atmosphere to the “Revolutions” album. It’s divided into 5 songs. The last one is just an 80-second reprise of the “This Life” theme. The four remaining tracks are more or less 10 minute compositions, and they match the illusory contrast between the complexity of the music and the delicacy of the vocal interpretation in a subtle way. In order to calm the anxious readers who may be worried that the material made up of the songs which didn’t fit into the main “Home” CD are of an inferior musical quality, I will say that “New York Suite” is not any reject! It has a little bit (but just a little bit!) of a different atmosphere than “Home”, but at the same time it remains characteristic of Magenta’s style. “Home” and “New York Suite” are like two faces of the same Magenta. Although similar, they are adorned by a different make-up. Together they represent 108 minutes of new, wonderful music by this very popular band. 108 minutes of marvelous sounds in a magenta colour. I was not disappointed by them at all. They were worth waiting for.