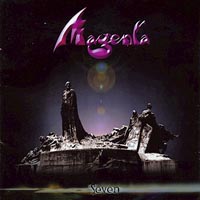 The title of  the second album of Magenta is „Seven”. It comes from seven deadly sins. Such is the concept of Magenta’s leader Rob Reed. Some may remember him from the band Cyan, which released a couple of interesting albums through a famous Dutch label SI Music. Few years ago he decided to change his favourite color, and cyan has turned into magenta. The latter is definitely more spectacular, not only as the color itself, but mostly because of the musical point of view. In 2001 the debut Magenta album entitled “Revolution” was released. This release echoed with many outstanding reviews and very positive reaction of the audience. And if in case of previous Magenta CD “Revolutions” most reviews marked this album as very good, now we can say that “Seven” is even better. It is true and quality progressive music on the highest possible level. The music is inspired by the best achievements of the greatest stars of the genre. It is very easy to find references to the works of Genesis, Yes, Renaissance and Pink Floyd, but in Magenta’s melodies we can hear modern ideas and very original elements as well. Everyone can listen to this album with the great pleasure. This album is full of excellent compositions, ideal performance, interesting voice of the singer Christina (in fact Christina Maria Booth) and beautiful instrumental parts. With no doubt we can say that each particular track on “Seven” is probably best progressive rock music one can dream about in 2004. Seven deadly sins, seven tracks which illustrate the histories that stand behind the bible  sins, seven musical pearls. The true joy of listening. They all are magical journeys, which make the listeners happy and fully satisfied. One returns from this journey totally changed. Magenta music releases  the emotions which make the listeners feel better and even the surrounding world becomes more colorful. “All the world is magenta”. This banner should apply to all devoted fans of ambitious and intelligent rock music. Yes, it should, because I haven’t heard equally beautiful and optimistic album since ages.