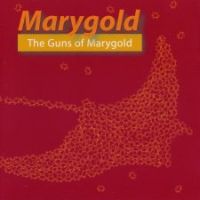 I like this album very much. Well, perhaps it doesn’t contain very revealing music, but its atmosphere matches just my favourite atmosphere. “The Guns Of Marygold” is a debut of the Italian group Marygold: (Guido Cavalleri (v,fl), Marco Pasquetto (dr), Massimo Basaglia (g,bg), Stefano Bigarelli (k)), who don’t exert themselves to “discovering the progressive America”, but present music, which just plays in their hearts and souls. We can hear their enthusiasm and sincerity in every minute of the album. The album doesn’t belong to the long and expanded to the breaking point eposes. Just the opposite, it lasts only 40 minutes, so in its size it ideally refers to gold (or “black”, if you prefer that) vinyl era. Stylistically, Marygold also invite us to the gold past of the genre. The keyboard player is undoubtedly fascinated by Tony Banks’ way of playing. Warm voice of the vocalist represents kind of Gabriel-Fish climates and the rhythmic section also refers to that convention. It’s a similar convention, which is represented by the productions of another Italian band, The Watch (“Ghost”, “Vacuum”). Marygold’s productions are not as theatrical as The Watch’s, but have the same epic flow, power of sound and wonderful atmosphere of the 70’s. “The Guns Of Marygold” consists of 6 tracks, all of which are played in a way, which is well-known to all the fans of early Genesis. Clear sound, symphonic flow, climate from the old rock fairy tale. You could say, the bookish progression. In short, this is a model example of what is called “progressive”, “symphonic” and “art rock” in rock music.

As far as the structure is concerned, all the tracks are similar to each other. They last around perfect 7 minutes each, apart form 3-minutes long “Tania Stands”, but this track doesn’t depart from the others in a climate and quality level. 6 tracks, 40 minutes of music. I imagine an old large cardboard sleeve envelope, from which I pull out a black vinyl disc, which I put into the gramophone and after a few obligatory cracks I can hear the beautiful, magical sounds. Two times for 20 minutes. Three tracks on side A and the following three o side B. Good times. Ah, I have tears of emotion in my eyes...

And although in today’s digital reality I am listening to the music of Marygold from the small silver CD, I think, that the band succeeded in evoking the atmosphere of the bygone époque. I like their progressive “regression” very much. I know, that there are people who would say that all of that have already been played, that this is how the music was played 30 years ago, that they model themselves on some other artists, that they copy etc… However, I would say that you can see that the music is good when it evokes strong positive emotions in the listener’s heart. I prefer “The Guns Of Marygold” to dozens of another albums, which I’ve been listening to recently. I’ll repeat once more: probably, this CD is neither groundbreaking nor revealing, but nonetheless it’s extremely good release.

Clive Nolan: “Song of the Wildlands” - What’s Not to Like?