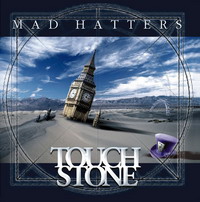 Facts: Touchstone is a British band that has already recorded two four-track EPs: “Courious Angel” (2005) and “Mad Hatters” (2006). Music from the new CD was mixed by John Mitchell (Arena, Kino, Frost, The Urbane). Touchstone is the quintet: Rob Cottingham (k,v), Liz Claydon (backing vocals), Adam Hodgson (g), Paul Moorghen (b), and Simon Cook (dr). The majority of them has played in many different musical units in the past, some played on the other exponents’ albums, but it is Touchstone that is their first group that they can fully identify with and put their trust in.

Music: The tracks which make the short programme of “Mad Hatters” originate from sort of four different genres. “Misguided Fool” is a catchy hit record sounding very pop-like. “One Shot” is a rock song, based on an neat guitar riff. “Hear Me” sounds like taken from a dream and as far as the instrumental part is concerned – is reminiscent to some of Vangelis’ productions. “The Mad Hatters’ Song” is an epic story, consisting of many parts, sounding very neoprogressive and performed in a thrilling and rousing manner.

Evaluation: Great production, ease with the operating with the sounds, good musical ideas and conciseness of the artistic work. The executive technique- beyond reproach. Touchstone’s music is a solid rock playing and anybody can find something for themselves in their work. However, I am not sure if, paradoxically, it’s not the biggest weakness of this album, because I’m not convinced whether the band knows what kind of a listener they adress their music to. Is it for the lovers of mellow and relatively simple pieces, or rather for the people who are acquianted with progressive music, who expect compositions with a strong emotional charge and epic swing? A formula “there’s something pleasant for everybody” doesn’t turn out for the best for the band. That’s why I can’t wait the full-scale album of Touchstone, as the two past small CDs, although in some fragments they’ve whetted my musical appetite, in my opinion, weren’t finished masterpieces. But it’s not about this in an 20-minute EP which is just a practice before recording the full-scale album. It is clear that the band keep on developing and try to find their identity on many musical fields. What will be the result of this search? The time will show. In the meantime, I keep my fingers crossed, because Touchstone is doubtless one of the most talented and distinct young performers whose music I have listened to recently.