If -The Stairway (English version) 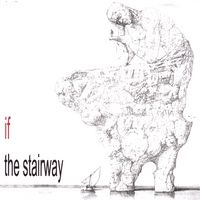 The history of this band is pretty complicated and complex. In short, they started working together as a band at the beginning of the 90’s, and now they are scattered all over the Europe – however their first officially released album, “The Stairway”, has recently come to light and it seems that there is a good chance that it will find many fans in the progressive audience.

The album starts with clock ticking, which is the introduction to song “Close Your Eyes”. Relaxed vocal of Paolo De Santis gives it a very calm character, which changes dramatically in the next track entitled “Uneasy Sleep (Part 1)”. It is a dynamic, keyboard-guitar combination of weird sounds and melodies, and at the same time the first of three parts of the cycle, which recurs in the following part of the album. The “weeping” and “carving” style of Dario Lostella (g) is worth mentioning.

After this track, there is a short moment of calmer music, and then, suddenly, rhythmic sound of percussion announces the title recording. During it the sounds of Hammond organ (Claudio Lappena), guitar and vocal reign and dominate. There is, unfortunately, a bit of chaos in this track, as if the group tried to be kind of power-metal. At some point, it seems that the recording develops in the right direction, but then, out of the blue, the song ends. To me, it is definitely too short track.

Then, we have another experiment with sounds, that is, the second part of “Uneasy Sleep”. We find a pinch of cosmic rock with bulging sounds of bass synthesizer (great Franco Bussoli), some whispers, guitar dissonance and… a smooth bridge to another track “Where Have You Been?”. Again, we have a substantial dose of space rock here, that is a good base for a quite good composition, but unfortunately it becomes just a kind of ordinary recording with rather crazy guitar textures.

The track that follows it, “Like A Bird”, is the longest, the most bombastic, and at the same time the best and most interesting one from the whole album. It begins like a mellow and solemn ballad (piano plus vocal), and after a while it increases in tempo and instrumentation. Although it may seem that at times the vocal and leading melody are not properly synchronized, “Like A Bird” is doubtless the climax of whole album. Interesting melody and chorus are accompanied by backing vocals a’la Queen, frequent changes of tempo and themes diversity. It is a wonderful composition, crowned with bird chirping.

But there’s no time to relax. Then, the group If propose a mad playing in fusion style. “Missing” has something that forms the post punk rebellion like The Offspring and Green Day. Paolo sings here with an exceptionally low voice, which gives similar effect to Steve Hackett’s singing in “The Devil Is An Englishman”.

Relax is possible while listening to the third part of “Uneasy Sleep”, which is the most melodious from the whole cycle and it doesn’t irritate the ears with any sound of cacophony, as it was with the two previous parts.

Now, here comes something exceptional: here begins the track entitled “It’s Just Me”. There is only a voice and acoustic guitar here. The atmosphere could make you light the candles and meditate. Sorrow and nostalgia – like in the inspired ballads of Peter Hammill. Very dejecting lyrics, as it is about leaving and dying of longing. Beautiful track, but surely too short again.

After that, there is the final of the album: the track “Find Your Way”. We can see a stylistic comeback to space rock, but if you listened to it more cautiously, you could hear the elements of reggae and ska, too. The atmosphere is also a little bit like Caribbean, which – looking at the album as a whole – seems to be completely out of place. I think that this particular composition could have been omitted, as “It’s Just Me” is a perfectly good ending to this, objectively speaking, not bad work of the young Italians.

It’s time to sum up. “The Stairway” is not the album, which would open your eyes on the music. It neither changes the world nor revolutionizes the genre. And the question is: what genre? Is the music of If a prog rock? It’s extremely tough to answer this question. However, the listeners who look for interesting sounds and diversity in music can surely find on “The Stairway” something for themselves. I think that this album is going to be most successful in the circles of space rock’s fans and those who like “guitar carving” and abundance of interesting melodies.

If I had to choose between marking it “average” and “very good” album, I would rather lean towards “average”. But I have no doubts that it is still enough space between both and it makes this CD a solid album and it’s worth devoting some time to get into this music.