Cyhra - Letters To Myself 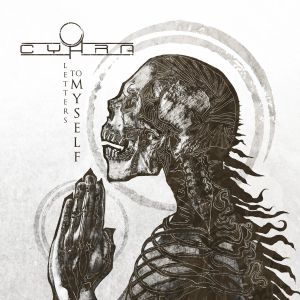 Cyrha were formed in 2016 by long-time friends ex-Amaranthe vocalist Jake E and former In Flames guitarist Jesper Strömblad. Jake says “At the beginning of 2016, Jesper and me sat down to have a cup of coffee, and we were discussing what we wanted to do with our respective careers. Jesper said that he was going to go and record a solo album and I was saying that I was actually walking the same path, although I didn’t know if I was going to leave Amaranthe or just do something completely different. Jesper asked me if I’d be interested in singing on his solo album and then I more or less asked him the same thing, would he play on my solo album? Then we discussed what kind of music we each wanted to do, and after ten minutes Jesper stood up and said ‘What the fuck? We want to do exactly the same thing! Let’s start a band instead!’ That’s how it all started. A couple of months later I decided to leave Amaranthe, and this became my main priority.” Completing the quartet are former In Flames bassist Peter Iwers and Alex Landenburg, current drummer with power metal act Luca Turilli’s Rhapsody and a former member of thrash legends Annihilator. So, this is a new band, but one that has a great deal of history and reputation coming with it.

Now, I have not exactly been a fan of In Flames in recent years, and given there are two ex-members here, I wasn’t sure what to expect, but I needn’t have worried too much. This is a modern take on metal, bringing in melody yet also crunching riffs and pounding drums. There are times when they sound as if they have been listening to too much Linkin Park, then others where they are far more symphonic, and yet others where the riffs crunch. I must confess that I am not a mad fan of all of the keyboard effects and influences they use, but there is no doubt that they the guys have combined to create something that is going to have quite an impact on the scene. Their very first gig was a headline show, and they have stated that this is not a project but instead is a full-on band that is going to tour anywhere and everywhere. It is going to be interesting to see what happens next, as I do expect them to become even heavier with being on the road, and at that point things are going to get really interesting. It is no secret that Jesper has had issues with alcohol abuse over the years, but he has pulled through and here he seems to be playing better than ever. An album of anthems designed for the stadiums, this is polished and modern metal, and while not perfect is certainly interesting.