Ryszard Kramarski Project, The - Sounds From The Past 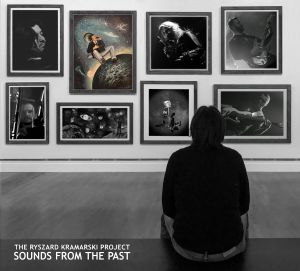 Keyboard player Ryszard Kramarski will always be associated with his label Lynx Music, and his band Millenium, but it all started with a project who recorded an album which was never really expected to see the light of day. The project was Framauro, and the album was ‘Etermedia’. Ryszard released 500 copies on his newly established label and they all sold, and when friends asked him when he was going to record another album, he decided it would be undertaken in a more professional manner and Millenium was born. To celebrate the 20th anniversary of the label, Ryszard decided it was time to revisit the album which started it all, and the cover shows this very clearly. We are looking at the back of Rryzard, who is sat looking at a wall of pictures. Seven of these are black and white photos, while the one colour piece of art is the cover of ‘Etermedia’ from all those years ago.

Ryszard says, “Etermedia's album had many disadvantages typical of amateur musicians starting their adventure with recording in a home studio. That's why I thought many times to record it again, changing the arrangements, but leaving the melodies and main musical themes.” He has also changed the language so it is in English, and instead of male lead vocals we instead have the delicate tones of Karolina Leszko. The other musicians are the same as on Ryszard’s last album, namely Marcin Kruczek, Paweł Pyzik, Grzegorz Fieber and of course Ryszard Kramarski himself. It isn’t really possible to compare the two albums, as there are so many differences between them that it isn’t really possible, so instead this really needs to be viewed as a totally new release, especially as so few have heard the original.

The whole album feels relaxed, almost laid back, in a Crossover progressive poppy sort of manner. There are Floydian touches here and there, especially with the Gilmour-style guitar, and there is a real swing and groove in much of what they are doing. “The Fairy Tales of a Stranger” is nothing but infectious, a number which gets the listener heavily invested and interested in what is going on. Karolina’s vocals are sublime, very little accent as she gently sings with little effort or force, as the album rarely demands power (although there is enough contained in here to provide strong contrast). The arrangements are superb, with strong production, so each instrument is clearly defined, and everyone has their part to play in what a superb piece of work. When the guitar cries out on “Welcome To My Channel!” I am reminded of Final Conflict, and I can see fans of neo-prog seeking this out as much as symphonic and crossover fans as it really hits a lot of points across many sub genres.

This is a wonderful album, accessible and enjoyable from the outset and just gets better each time I listen to it.