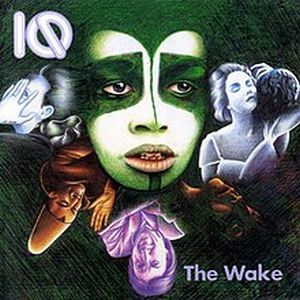 So, onto the difficult second album. No sweat. ‘The Wake” showed a harder, rawer edge to IQ as they developed their sound, becoming more majestic and dramatic. The album revolved around the theme of death and the possibility of an afterlife. “Outer Limits” encapsulates IQ as the time, emotional and mood changes stretch the very boundaries of progressive rock. It is listenable and commercial, yet at the same time it is challenging and diverse. Peter is at his most emotional and fraught self, and the overall effect is simply stunning. The title cut is next and threatens to blow the bass speakers as it proves that prog bands can be as heavy and menacing as they come. “The Magic Roundabout” starts with held-down keyboard chords, but as the listener is lulled into a false sense of security, suddenly Paul and Tim put in a sudden burst and we are off. The bass work on this is just superb. “Corners” is a total change of pace as a drum machine is used to provide the basis for a far more commercial approach (this song was used as a single). “Widow’s Peak” was the oldest song on the album, being first played in January 1984, and again it is the ever-changing moods and melodies that capture the ear, from the gentle to the bombastic. “The Thousand Days” is a fun bouncing joyous number, in total contrast to what some see as IQ’s finest song, “Headlong”. The vocal passages have a minimum of backing, allowing Peter to shine through, while the instrumental passages, in direct contrast, are thundering and menacing. There are three bonus songs on the CD: “Dans Le Parc Du Chateau Noir” appeared on the B-side of the 12” version of “Barbell Is In” and can be found on the ‘J’ai Pollette D’arnu’ CD. The other two tracks are extremely interesting, as they are demos of songs that later appeared on the album itself, namely “The Thousand Days” and “The Magic Roundabout”. A superb album. I am sure that many of you already have ‘The Wake’ in your collection, but it is worth getting on CD.