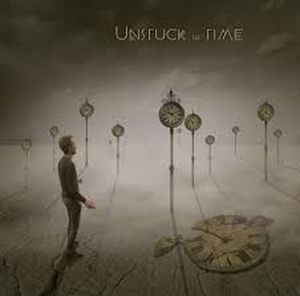 Canadian singer and multi-instrumentalist Rick Miller has been incredibly active since the release of his second album ‘Interstellar Passage’ in 2000, and ‘Unstuck In Time’ is his fifteenth, released at the end of 2020. The album title itself is taken from Kurt Vonnegut’s ‘Slaughterhouse Five’ and is the inspiration for the title track (which closes the album and is more than 11 minutes in length). Rick tends to stay with the same musicians, and this album contains the same line-up as ‘Belief In The Machine’, apart from the return of long-time collaborator Kane Miller who was not involved with the last release. This means Ricks is joined again by Sarah Young (flute), Mateusz Swoboda (cello), Barry Haggarty (guitar), Kane Miller (guitar, violin) and Will (drums, percussion).

Rick is one of a very few progressive musicians whose music is instantly identifiable and not really like anyone else. His albums are always intensely atmospheric, with artwork and themes which are related to that. When listening to his albums I find myself drifting into a different world where the only items that exist are the music and his vocals. He sings in a way where there is no stress or strain, lulling in the listener, and one feels like we are drifting through an environment on a feather, being allowed glimpses into some magical places. There are times when he allows the guitar to cut through, but for the most part this is a journey where the layered arrangement is everything.

For some reason Rick has kept below the parapet of prog yet he keeps releasing incredibly consistent albums which are always thoroughly enjoyable, and the listener feels enriched having heard them. This is the ninth release of his I have been fortunate to hear, and all I can say is that if you have yet to come across the world of Rick Miller then you owe it to your ears to do so. Play this on headphones and fall into his universe.