Quatro, Suzi - The Devil In Me 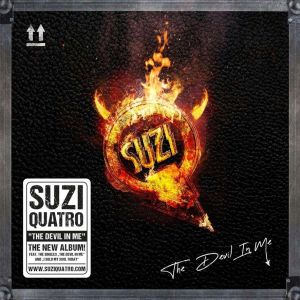 In 1973 I was 10 years old, and the highlight of my musical week was watching Top of the Pops on a Thursday night. Like every other boy my age this was the first time we saw the mop-haired leather-class bass player from Detroit, who had hit after hit with “Can the Can”, “48 Crash”, “Devilgate Drive” and many more. She married her guitarist, Len Tuckey, and although her hitmaking died out in the 80’s, she continues to tour and is now back with her 18th album. When all her gigs were cancelled due to Covid, as were her son’s, she told him they ought to set to and write some songs for a new album, and that is exactly what happened.

One good thing about Suzi is that she has never veered too far away from the style which made her many fans back in the day, and her voice is just as good as ever. In fact, if someone played this and said it was an album from her hit Seventies period there would be few who would dispute it, as this is just a load of fun. Yes, it is incredibly basic 4/4, but there is enough variation for everyone, and “My Heart and Soul” is a lovely Christmas song, while “Get Outta Jail” starts with chain gang blues. But it is the rocking numbers like the title cut which most people associate with Suzi, and with her son crunching the riffs just like his dad used to, there is plenty hear to smile about. It may not be the most original album of the year, but sometimes this style of rock is exactly what is needed. Recorded when she was 70, this album shows that she is not going to retire gracefully just yet.