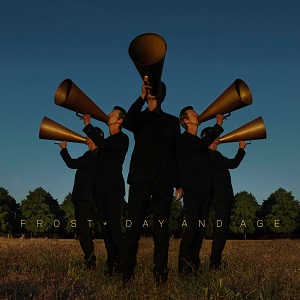 Back in 1986 keyboard player Jem Godfrey formed Freefall, who were soon opening for the likes of IQ, Geoff Mann, Ark and Galahad. However, at some point he decided it might be an idea to make a living out of music instead of playing prog, becoming a composer and producer of pop hits, working with the likes of Atomic Kitten, Blue, Ronan Keating, Lulu and Samantha Mumba. But prog kept calling to him and in 2004 he formed Frost* with Andy Edwards and John Jowitt of IQ along with guitarist John Mitchell (Arena, Kino etc.) Their debut album, ‘Milliontown’, was an immediate hit within the prog scene, and although there have been some changes and absences over the years, they are finally back with their fourth release. The line-up now is consolidated around the trio of Godfrey, Mitchell and bassist Nathan King, and instead of using a single drummer they have instead utliised the services of Kaz Rodriguez (Chaka Khan, Josh Groban), Darby Todd (The Darkness, Martin Barre) and Pat Mastelotto (Mister Mister, King Crimson). They all bring very different styles, and the band have been able to utilise these to create shifting dynamics between songs.

The result is a modern progressive rock album which is just as exciting as the very first time I came across these guys more than 15 years ago. Mitchell has no need whatsoever to prove his prog credentials as he appears in so many different places, while Godfrey is a multi-million selling songwriter and producer, and together they have created a band which truly excites people. It is not unusual for me to the first contributor to an album on PA, but that is certainly not the case with these guys as there are plenty ahead of me, such is the hold they have on the scene. Only four albums, but they are always a delight with the band incredibly tight, harmonies abounding, plenty of guitar but never to the detriment of the overall sound.

Some album introductions get a little cheesy over the years, but somehow I will never get past the small child telling us to sit back and relax, and “enjoy yourselves…. You scum”. I did sit back and enjoy myself, and didn’t take the scum comment personally, and found that this is an album full of light and dark, passion and power, quietness and very loud guitars, all with a commercial sensibility and complexity of arrangement which is just plain fun. Neo-prog just does not get any better than this.

This album is a proghead’s delight from start to finish, and is possibly their best one yet.