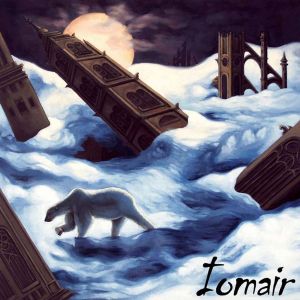 Iomair, (Scottish Gaelic for the word “Row”) is a new band which has been brought together by drummer, singer (clean) and songwriter Dylan Gowan (Vesperia). Established in late 2017 in Scarborough , Ontario, Canada, with the desire to create something progressive and unorthodox, Iomair proudly state that they draw influences from all genres including metal, folk, Latin and funk and especially from bands such as Opeth, Cynic and Porcupine Tree. The result is something which at times is compelling, and at others causes the listener to scratch their head trying to work out what is going on and how it fits with the rest of the album. Take “By Design” for example: most of the vocals are by Sam Asgaroth in a dirty blackened death style, the music is mostly djent with folk style violin, plus there is a sax, and at times they break into something which is Seventies, harmonic and light, and quite at odds with the rest of the song.

The problem for me is instead of providing dynamic contrast between the different styles, it actually causes confusion, and a feeling that Iomair are throwing loads of different things at a wall and trying to work out what will stick and what will fall. They never seem to take any of the musical styles to their logical conclusion, so it all comes over as “lite” and sticks in the middle of the road. It isn’t as if what they are doing is really experimental or ground-breaking, it never really goes far enough in any one direction. That being said, it would be interesting to see the guys play live as I am sure in that environment, they will be much heavier, and that may allow them to carry this off. When they do decide to stick more in one format, such as in “Yearning”, there are glimpses of what can be as Dylan takes the vocal lead on this, and the combination of acoustic guitar and violin shows there is real promise behind what they are doing.